Last week was our first week back. It was weird being back at school so close to New Years.  We had staff development work on Monday the 2nd but were done by mid-day and were able to work on whatever we needed to.  The wifey had to work for much of my first week off so I tried to get a lot of my second semester planning done then.  My semester stays the same with exception to a new group of kids in my robotics class.

GETTING STUDENTS TALKING IN MATH

I did a pretty fantastic ‘how do we do group work in here’ activity by Sara Vanderwerf.  Ideally works well for the start of a year but start of 2nd semester is good too.  The abbreviated explanation is that students have to work together to find as many numbers in order on the following sheet: 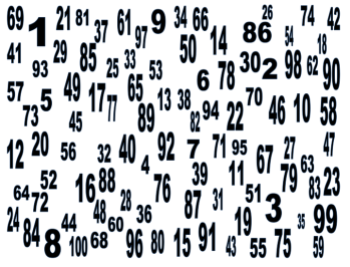 They have to circle the numbers one at a time, in order, and one person after the other going clockwise has to do the circling.  You take pictures of them working, give them several rounds to start recognizing the pattern, and with each new round they try to find more numbers than the previous round.  Afterwards you show them the pictures of them working and have them reflect on the question ‘what does great group work look and sound like.’  I’m in process of having some students make posters of what was shared and photos of the kids working together will be on the poster as a reminder.  I highly recommend you read Sara’s full write up of the activity.

Every class said they really enjoyed it; really engaging work on the first day back, gets students talking about patterns and numbers, and serves as a way to model and remind ourselves of the expectations / norms when it comes to group work.  I filmed the groups doing it and plan on making a short video on the activity.

The unfortunate thing about this activity is that ‘group work’ in my class rarely involves 3-4 people who each have a specific role.  It’s typically students just huddling together with one or two other people working through a problem together, sometimes just checking in with one another when they’re stuck.  Of course the lessons learned from this activity can transfer over to that type of less-structured group work, but I’d like to have some more structured group work sprinkled in here and there.

We’re getting into writing expressions and solving one and two step equations.  We’re starting with the distributive property; one of my favorites.  I have students work through this packet from the NCTM; groundbreaking pedagogy, I know.  I love the packet though.  It forces them to visualize the distributive property as area models and the way it scaffolds the learning is fantastic.  They move from writing expressions to find the area of very simple rectangles and move their way to factoring 3x out of 6x^2 – 9x to get 3x (2x -3).  Vocabulary also becomes a way of naming something they’re already doing, instead of leading with vocabulary that doesn’t mean much (‘what you’re doing here is called expanding using the distributive property’ or ‘this is called a coeffecient when you are multiplying a number with a variable.’)  Mostly positive feedback from students on the packet.

I start by introducing the packet, do the first couple, let them work together for a little while, then go over the next few.  I started putting the answers up on the board to the next six problems but made small mistakes in them. With each problem, I asked if everyone agreed with my answer.  It forced them to really look at what I did and analyze their own work justify why they did what they did.

Ah, venturing back into fractions.  I wrote at length last year about this being one of the most challenging units.  I plan on having them work with both number lines and fraction circles once we get to start adding/subtracting.  I think I’m going to have them play around on this website for a while as I move throughout the class, helping students.  Fractions seems to be where the biggest disparity occurs between the kids who really get it and those who are fairly lost so it’s difficult to do whole group discussions.  Currently just working through converting between mixed/improper/decimals.

I think I’m going to nix the budgeting aspect of classroom economy for my 6th graders next year and just have it in Pre-Algebra.  It just becomes overwhelming for students; am I saving for my desk, will I have enough for April taxes, do I have enough in my emergency fund, I’d still like to have money for the monthly auction, etc.  It takes up significantly more time for them to update their budgets than my 7th graders.  I’ve sort of fallen behind on some of the Classroom Economy videos.  I’m sure hundreds of teachers have just been waiting for them with bated breath.

One small change I made this semester was in an effort to solve the problem of rough starts at the beginning of class and right after our 2.5 min breaks.  Students never had their supplies out at the beginning of class even after consistent reminders.  After breaks they would still be chatting when the timer was off or arguing about who got back to their seat by the time the timer got to zero (not being in your seat results in a fine).

The new policy is that students will be asked to step outside while we center (beginning of class breathing exercise) if they do not have the appropriate supplies out when I close the door.  They will be marked tardy, both in the official documentation as well as in our classroom economy, which results in a fine.  As far as coming back from break, they have to have the right supplies out, be seating, and not talking when the timer gets to zero.  If they’re not in their seats with supplies out, it’s a tardy fine.  If they’re talking when the timer goes off, it’s an off-task fine.  Sent out the first culprits this week and have seen much more of a sense of urgency in getting ready for class.  Breaks are also much less chaotic to come back from.

I think sometimes in an effort to make my class feel more ‘organic’ (whatever that means) and allow students to practice self-regulation, I forget that students (much like myself) really crave structure, discipline, and clear boundaries.  I don’t want my students to help create a positive classroom environment just because they don’t want to get a punishment, but gosh darn it, that speeding ticket I got last week for going 84 in a 70 has really got me much more aware of my speed this week.